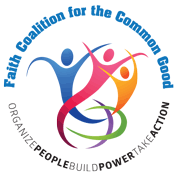 I first became aware of the Faith Coalition for the Common Good (FCCG) through my church, St. Katharine-Drexel Parish. I participated with FCCG during my employment with the City of Springfield through attending functions such as community activities, trainings, and social/fundraising events. I attended the events with members from my church and I suddenly realized that there was more to the Faith Coalition for the Common Good than I was aware. I remember thinking I didn’t realize the organization had an Educational Component. I knew that FCCG was on the forefront of securing jobs for the High Speed Rail Project but was amazed to realize the organization’s involvement in the Rail included; assisting displaced homeowners, making certain the project was completed in a safe environment, adapting laws, etc. I am still learning how FCCG is involved in the community helping persons from other countries and pursuing immigration rights. I knew that the FCCG had brought issues such as residency requirements and employment diversification issues to local government. Actually, I was a little overwhelmed, but enthusiastic by just watching the organization involved in voter registration, walking the community and encouraging our neighbors to get out and vote. As I became more acquainted with the Executive Director, Shelly Heideman; I remember thinking; “How can an organization achieve so much in such a short amount of time?” I quickly realized that Shelly was a gentle giant able to bring people from every walk of life together working cohesively to make an entire community take notice. And yes, the progress of the Faith Coalition for the Common Good continues to be achieved through the commitment and hard work of the membership. But still, with all this great effort and commitment, how did this come together so quickly? My conclusion, the Faith Coalition for the Common Good can only describe as a product of “Sweet Divine Intervention”. Something I knew I wanted to be more involved in.

After reviewing my options, I finally became a part of the City Service Task Force. I worked in the City of Springfield/Office of Human Resources for over Twenty Years. During that time, I volunteered in organizations that stressed increased minority hiring levels for police and fire; a true statement. But I have always been vocal in saying we need to change the environment within City Hall. We need people of color in all aspects of City government. I was elated to find that Faith Coalition for the Common Good had the same perspective! They were not just saying it, but they were showing statistics that supported the claim. The Faith Coalition for the Common Good went a step further – they were saying the City should reflect the community in all aspects of services including employment and contractual services.

The City has made strides to change purchasing criteria and the employment culture on the entry leave. More still needs to be done with police and fire. Even more crucial in City government is the environment. The environment in employment will not change without the hiring of women/ minorities in middle and upper management in City Government. And oh that “Sweet Divine Intervention”.

You are invited to participate in FCCG Upcoming Events –